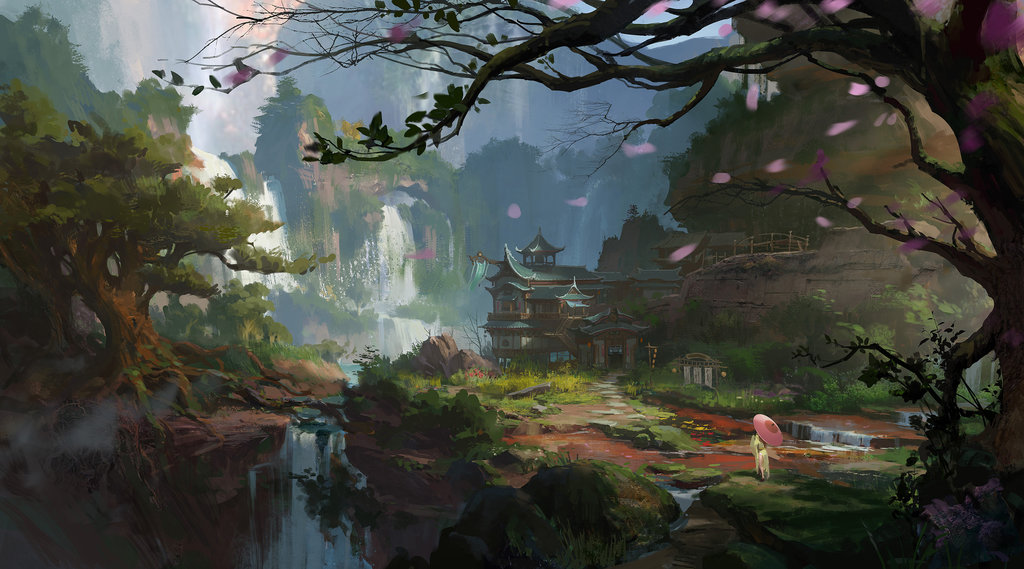 The Shenyue Empire, otherwise known as the Jade Kingdom, is a vast ancient country that lies to the far southeast corner of the world of Cyrene. Arguably the greatest civilization on Cyrene, Shenyue has seen several millennia of prosperity and development. It is a kingdom ruled by powerful dynasties, with an Emperor who holds the seat of power, mystics and monks who study ancient martial arts, wu jen strategists who control vast armies, and heroes who wield wondrous swords of the elements.

Welcome to the Jade Kingdom, a heroic fantasy wuxia campaign setting that is modeled from the ancient Asian cultures of China, Japan, India, and Tibet, with pop culture influences that include Romance of the Three Kingdoms, Avatar the Last Airbender, Princess Mononoke, and Journey to the West, among others.

The Shenyue Empire is an ancient land that is ruled by an Emperor who acts as both figurehead and benefactor. He presides over a council of lords, each with their own loyal generals, strategists, and armies. Throughout Cyrene, Shenyue is known for its vast wealth and powerful army, having never fallen to foreign attack. However, despite the Shenyue Empire’s renown, rumors abound that the kingdom is rife with internal conflict. In fact, while the empire keeps a façade of unity to the rest of the world, the kingdom itself has been divided up into smaller political fiefdoms ruled by its own lords, with each lord vying for power in Shenyuen court. For the moment, these individual lords swear fealty to the Emperor (with varying degrees of loyalty), but any sudden act of aggression may break the whole kingdom out into civil war. In response to this conflict between the political kingdoms, a small band of rebels called the Shadow Rebellion have started to revolt throughout the countryside against the Emperor and the Shen dynasty. Finally, rumblings of a darker force has begun to also rise, feeding off the impending strife within the kingdom and set to tear it apart.

Romance of the Jade Kingdom Reoryn

Romance of the Jade Kingdom Comments

I'm sorry, but we no longer support this web browser. Please upgrade your browser or install Chrome or Firefox to enjoy the full functionality of this site.